Artificial intelligence (AI) is a cutting-edge technology that enables robots to learn from their own experience. AI can be found in self-driving cars, smart homes, and chess computers, to name a few. They are based on deep learning and are equipped with artificial intelligence. Computers can execute complex tasks using these technologies. As a result, businesses are recognized for their enthusiasm for AI to obtain a competitive advantage over their competitors.

Around the world, current AI investments represent 80% of AI use by businesses across all industries. As more firms recognize the value of implementing AI-powered solutions into their operations, this number will continue to climb.

The development of these tools will aid us in the design of online projects and speed up the process of developing them. However, we must question whether these technologies will ever be able to bypass some specialists' features, such as front-end developers. You may envisage a tool that develops front-end code on its own, as the tools above indicate if it's not that difficult to come up with an AI that makes unique ideas.

Nowadays, you can already find some AI-Powered Tools in big companies. Here are some of them:

The usual approach for developing a website is as follows: first, you must employ a web designer to create the layout of your website, and then you must hire a developer to write the code for this design - the process can take months, and you will need to invest hundreds of thousands of dollars. 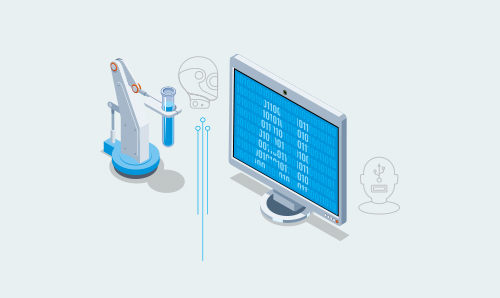 With just a few HTML snippets, you can set an image to any web page, email, or other HTML or XML document on the web, just like Fronty does when building an AI website, which can save you a lot. the time when converting an image to HTML by simply uploading one image.

While you cannot "convert" an image to HTML, you can save the image locally or to a specific web address and then choose a location for it in the HTML document. You can also define how many pixels should be displayed in the image both horizontally and vertically.

We've created a list of tools that generate HTML code themselves.

Sketch2code is a web designer's dream come true. Developed by Microsoft as part of one of the AI Labs innovations. Sketch2Code can generate HTML code from sketches. It converts hand-drawn sketches into HTML forms using computer vision. It does this by understanding the structures drawn and trying to identify the underlying element.

This reduced the time it takes to convert ideas into real HTML forms, which accelerated the design process.

DeepCode is a code checking tool founded by Boris Paskalev, Veselin Raichev, and Martin Vechev. Its purpose is to analyze your HTML code, figure out what is wrong, and alert you to problems. It shows you how to fix problems and can generate code. Since its inception, DeepCode has helped fix thousands of code errors and helped fix numerous security flaws. It also made it easier to audit your HTML code.

PyCharm is a Python Integrated Development Environment (IDE) available on multiple platforms. Designed by JetBrains and released in 2010, it has been continuously improved. Some of the features provided:

● Strong debugger integration with a wide range of frameworks and languages.

● Options for fine-tuning the IDE through settings and adding additional functionality through plugins.

● Options for fine-tuning the IDE through settings and adding additional functionality through plugins.

Bayou is a deep learning tool developed by a team of computer scientists at Rice University. He gathered data from Github repositories to gain context for the code.

The input Bayou accepts may include a small amount of information and may attempt to output what the developer wants. If he cannot give an immediate answer, the most suitable solution will be offered, which is closest to the actual one. The solution can then be tailored to solve a specific problem.

Dan Belcher and Izzy Azeri created mabl mabl in 2017. It is a functional testing tool designed to simplify the development and execution of functional user interface tests. It allows developers and testers to test application performance across multiple platforms.

You can sit down, relax, and Mable does the rest.

Pylint is a code quality and error-checking tool for Python. Originally named after the Python prefix "py" and the "lint" program of the C language. Released by Sylvain Teno in 2001 and has been continuously improved over the years.

Pylint aims to improve the developer's code in several ways by checking the following:

● Correct use of interfaces.

Pylint also offers customization and integration options with other services.

Ubisoft and Mozilla have teamed up to develop Clever-Commit, an AI-powered programming assistant. It aims to improve code quality by analyzing code commits and identifying programming errors. This analysis leads to early identification of errors that can be easily corrected, which reduces troubleshooting costs and saves time.

All input to Clever-Commit comes not only from code commits but also from bug trackers and version control tools.

Founded in 2014, Kite is a Python autocomplete tool similar to what we use on our phones. This allows developers to write code up to 50% faster, cutting development time by nearly half. Not only that, it offers fixes for any spelling and syntax errors on the fly. He even recommends how others have used this code.

Kite does it all by learning how you code using its codebase and continues to improve.

This can benefit not only developers but also system architects and software managers.

Run: AI was co-founded by Omri Geller and Dr. Ronen Dar in 2018. Its goal is to provide a virtualization layer for deep learning models. It collectively manages a pool of shared resources and distributes tasks across the chip, while ensuring maximum performance. The goal is to provide a fast AI computing platform.

It is integrated with numerous platforms such as TensorFlow, Azure, AWS, Google Cloud Platform, Docker, and more.